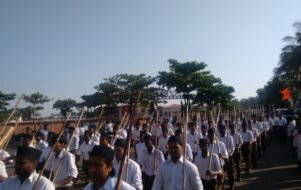 ​City of Bagalkot donned a saffron look with major circles, junctions painted with trademark RSS  flavour, feelings, emotions pertaining to country of India having gripped the city to witness RSS (Rashtriya Seva Samiti) stride in continuation of its long standing legacy at this city which is inundated by the back waters of UKP (Upper Krishna Project).

The fervour and gaiety however has excelled the worries and woes of people who have rehabilitated to the outskirts of city prominently called Navanagar, security measures will be beefed up to prevent any untoward incident.  RSS march past was its best, with scores of workers clad in RSS attire were divided into two groups to cover different paths for coagulation at Bashaveshwar Circle in the most disciplined manner, one could easily get impressed as the awe-inspiring March past depicted unity and diversity, spirit, patriotism.  People of all ages regardless of profession, cadre, participated in the rally.

RSS Marchpast is observed on every commencing Sunday after Vijayadashami (Dasara) backed up by an inspiring history, Dr.Keshav Hegdewar starting it.

Marchpast culminates at Basaveshwar Veerashaiva Vidyavardhaka Sangha Campus and will be followed inaugural speech by the chief guest, this occasion assures the concern, pride of our Indian culture, spirituality.  It reinforces the fact that, we have not been conquered by western culture and our national spirit have not been dampened by the invasion of western ideas and culture.